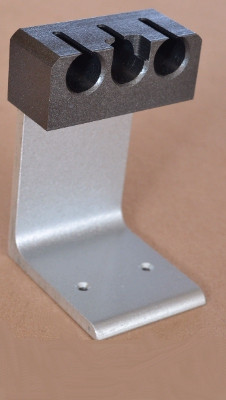 We designed the original TriPik more than seven years ago and it has continued to be one of our top selling items, as have all the stands in this line. For lock picking practice, you can't go wrong with them because they were built for that very purpose. Locksmith students, hobbyists and other security people who practice with lock picks and lockpicking tools can use the original Tripik to make their picking sessions easier because they will free up both hands and still rely on the mounted stand to hold the Practice Locks in place. The Tripik lock head accepts up to three practice locks at one time, although it can also be used to hold just one or two. Practicing with three separate locks is a plus simply because you can move from one to the next without having to remove the lock you were previously working with. Also, many of our lockpicking starter kits come with three practice locks, pinned with varying degrees of difficulty, and with a Tripik Stand you can work with all three in one session easily.

There are several models of Tripik now available, beginning with the original (model V1). We created the deluxe model a few years ago and it has been an even better seller than the standard model.

Along came the fantastic Tripik-II a short time later, created to give the locksmith student an improved stand with metal base, ball and socket joint, and almost unlimited adjustability. The Tripik-II allows you to lock your practice locks in just about any position through 360 degrees of adjustment.